Go under the sea in 2020 with one of Hans Christian Andersen’s most beloved stories and the classic animated film, Disney’s The Little Mermaid! A hauntingly beautiful love story for the ages with music by eight-time Academy Award winner, Alan Menken, lyrics by Howard Ashman and Glenn Slater and a compelling book by Doug Wright, this fishy fable will capture your heart with its irresistible songs, including “Under the Sea,” “Kiss the Girl” and “Part of Your World.”

Based on the Novel by Stephen King, lyrics by Dean Pitchford, and music by Michael Gore, this revamped, contemporary version of the famous (and infamous) 1988 production, “Carrie: The Musical” follows a young woman with telekinetic powers. An outcast at school and bullied viciously for her differences, Carrie is also lost at home, with a fervently religious mother whose love traps her in its jaws. When PE teacher Miss Gardner, kind classmate Sue Snell, and boyfriend Tommy Ross reach out to try and help Carrie, it seems that for once, Carrie might have a shot at being accepted. But Chris Hargensen, the class’s most vicious bully, has other ideas. Pushed to the brink, Carrie’s powers threaten to overwhelm her, and devour everyone around her in flame.

“Carrie: The Musical” is known as one of, or THE biggest, Broadway Musical Flop in history. The show officially opened on May 12, 1988 and was hit with mostly negative reviews. Despite the fact that the show was selling out every single night, the financial backers pulled their money out of the show, and it closed on May 15, 1988 after only 16 previews and 5 performances. Today, productions are opening everywhere – regionally and professionally

Snoopy: The Musical is a musical comedy
by Larry Grossman and Hal Hackady
book by Warren Lockhart, Arthur Whitelaw, and Michael Grace

SNOOPY!!! – the musical sequel to YOU’RE A GOOD MAN, CHARLIE BROWN. Based on the beloved Peanuts comic strip by Charles Schulz, the show sparkles with wit and warmth as it depicts life as seen through the eyes of Schulz’s unforgettable characters focusing more on the life of Snoopy. Musical numbers include “Just One Person,” “Poor Sweet Baby,” “Don’t Be Anything Less (Than Everything You Can Be),” “Edgar Allen Poe” and “Daisy Hill.”

Bat Boy: The Musical
is an American Rock Musical.
Book by Keythe Farley & Brian Flemming
Music & Lyrics by Laurence O’Keefe,
Bat Boy premiered at Actors Gang Theatre in 1997 and has since been produced off-Broadway, in London‘s West End, at the Edinburgh Festival and in scores of productions throughout the world. ~ wikipedia
Based on a story in The Weekly World News, BAT BOY: THE MUSICAL is a musical comedy/horror show about a half boy/half bat creature who is discovered in a cave near Hope Falls, West Virginia. For lack of a better solution, the local sheriff brings Bat Boy to the home of the town veterinarian, Dr. Parker, where he is eventually accepted as a member of the family and taught to act like a “normal” boy by the veterinarian’s wife, Meredith, and teenage daughter, Shelley. Bat Boy is happy with his new life, but when he naively tries to fit in with the narrow-minded people of Hope Falls, they turn on him, prodded by the machinations of Dr. Parker, who secretly despises Bat Boy. Shelley and Bat Boy, who have fallen in love, run away together from the ignorant townfolk and have a blissful coupling in the woods, but their happiness is shattered when Meredith arrives and reveals a secret. Soon the entire town arrives and hears the shocking story of Bat Boy’s unholy origin.
“Big laughs…It’s remarkable what intelligent wit can accomplish—a jaggedly imaginative mix of skewering humor and energetic glee.” —NY Times. “Smart, playful and funny…a giggling cult hit” —NY Magazine. “Outrageously silly and totally charming.” —NY Daily News. “At the end of the show, you’ve been gleefully, outlandishly entertained.” —NY Newsday. “Composed with smarts, staged with savvy and performed with gusto, BAT BOY: THE MUSICAL is a winner. You’d be batty to miss it.” —Star Ledger.

TICKETS: $15 General Admission / $10 Student/Senior
Tickets available soon at Eventbrite.com or at the door 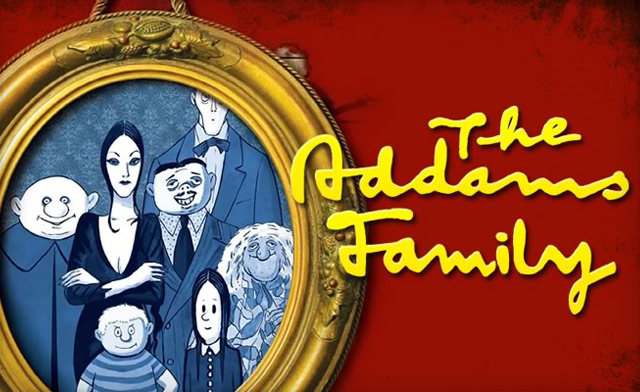 The Addams Family features an original story, and it’s every father’s nightmare. Wednesday Addams, the ultimate princess of darkness, has grown up and fallen in love with a sweet, smart young man from a respectable family. A man her parents have never met. And if that weren’t upsetting enough,  she confides in her father and begs him not to tell her mother. Now, Gomez Addams must do something he’s never done before – keep a secret from his beloved wife Morticia. Everything will change for the whole family on the fateful night they host a dinner for Wednesday’s “normal” boyfriend and his parents.

Bold, brash, and fun, American Idiot takes Green Day’s chart-topping punk rock album and brings it vibrantly to life. Music by Green Day, lyrics by Billie Joe Armstrong, and book by Billie Joe Armstrong and Michael Mayer, American Idiot follows a young anti-hero, Johnny, the self-proclaimed “Jesus of Suburbia”, and his two buddies, Will and Tunny, as they attempt to break out of their mind-numbing, aimless suburban existence. After escaping to the city, Johnny finds himself embroiled in a passionate affair with a stunning and unpredictable young woman, and an even more passionate affair with hard drugs Tunny quickly gives up on life in the city, joins the military, and is shipped off to war, but is wounded in the line of duty, both physically and emotionally. Meanwhile, Will, who decided to remain in the suburbs with his newly pregnant girlfriend, becomes glued to his couch, hopeless and stuck. Each of the men struggles to find the balance between rage and love — a conflict that defines their generation.